For a while, rooms could only be created by employees, not users

Nooklyn is a New York-based real estate marketplace specializing in apartment rentals, rooms, and roommates. For a while, rooms could only be created by employees, not users.

The old design didn't help users who wanted to move out

The old system only helped users move into an apartment by helping them find roommates. Many users have the opposite problem: they want to move out of their apartment so they need to find someone to take their place.

Over the years, Nooklyn received hundreds of requests from users over many years asking how they could post rooms. We talked a few and learned:

For the user, creating a listing was going to be a long process

During the planning phase, we realized that we needed a lot of information from the user which meant that we'd lose many users by the end of the funnel.
‍
To reduce the inevitable leakage, I decided to:

We broke the process down into smaller chunks

I worked with the team to order the required information in a way that made sense from a product and technical perspective. We agreed to divide the process into 5 major steps. Then, I tested a few iterations of a view that communicated each step and its corresponding state.

We landed on the "Outline" view. The process starts, flows through, and ends with this view. 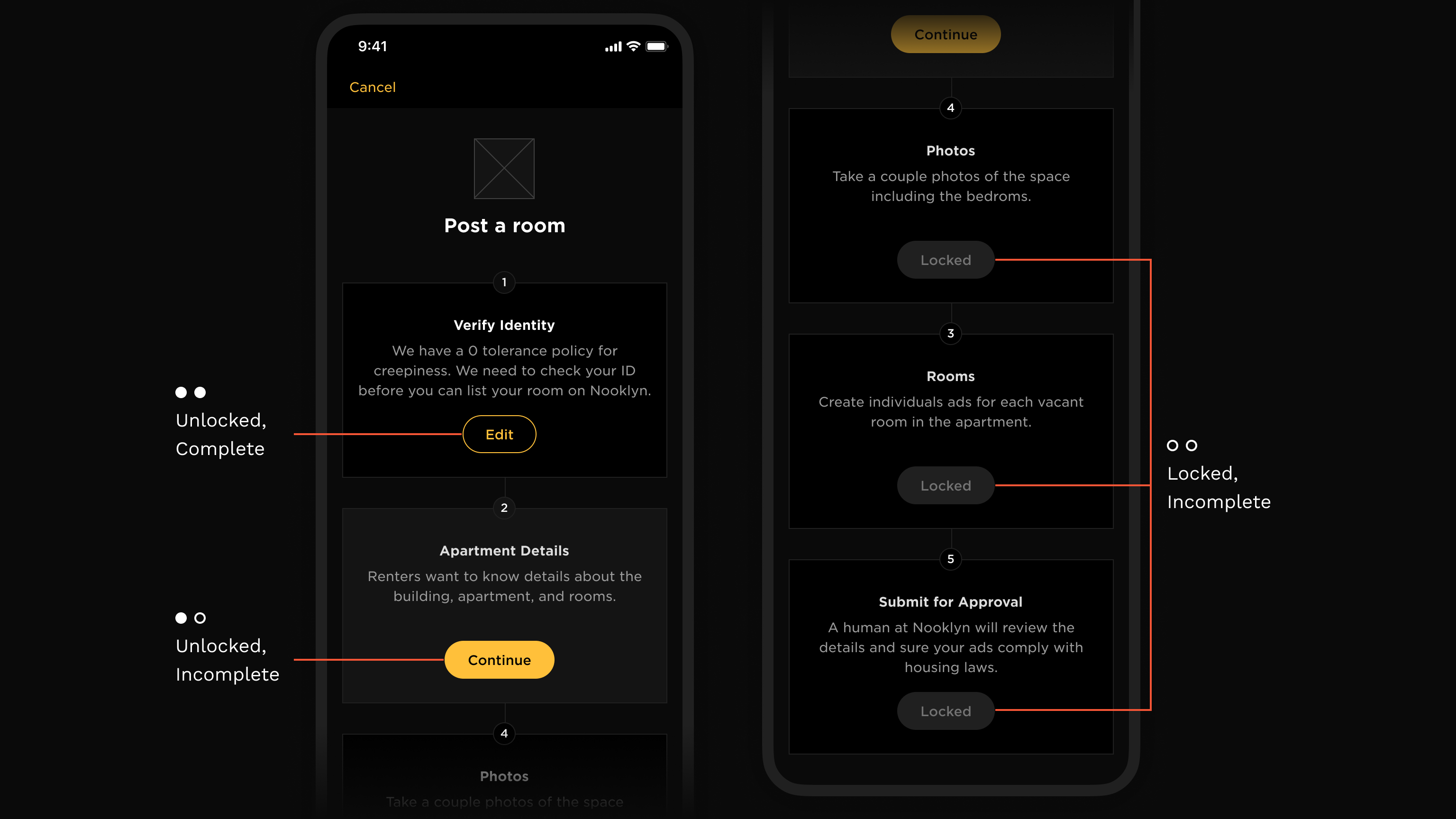 (1/4) First, we asked them to verify their identity to foster a safe community

Verify Identity was a big project that's the topic of this case study.

(2/4) Then, we broke it down even further as Apartment Details was especially long

Due to technical requirements, the user needed to enter all of an apartment's details in a single session to proceed. They wouldn't be able to edit any details after moving forward so it was critical that we helped the user complete the step quickly and correctly.

I designed a few new progress indicators to prevent the user from feeling lost and to encourage progress, settling on this two-tiered layout:

Step 2, Apartment Details, required 13 data points from the user. I split it into smaller subsections and added "Review" pages to the end of each one to give the user a chance to:

There weren't established design patterns for data entry so I designed a new form for each data type. 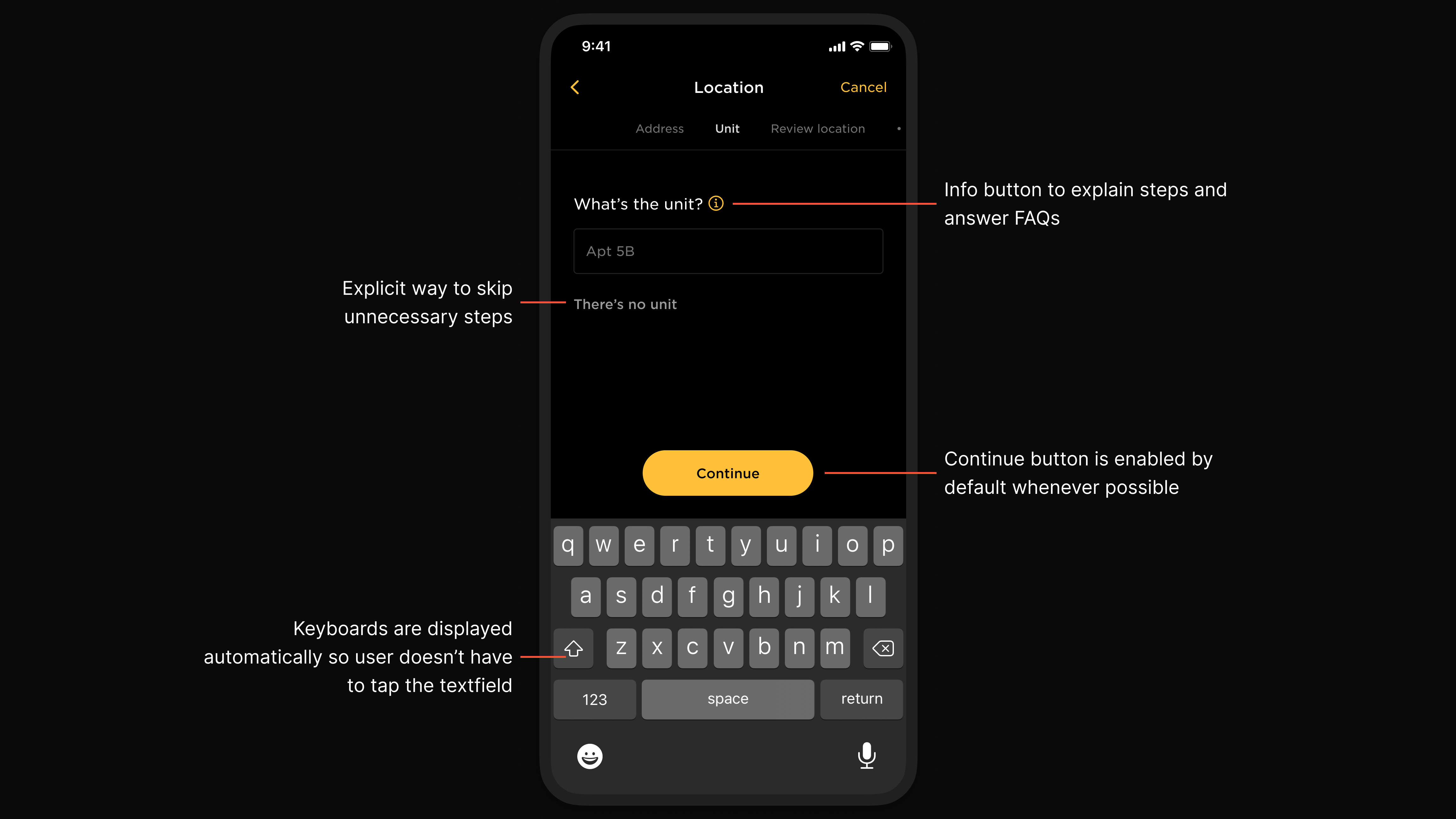 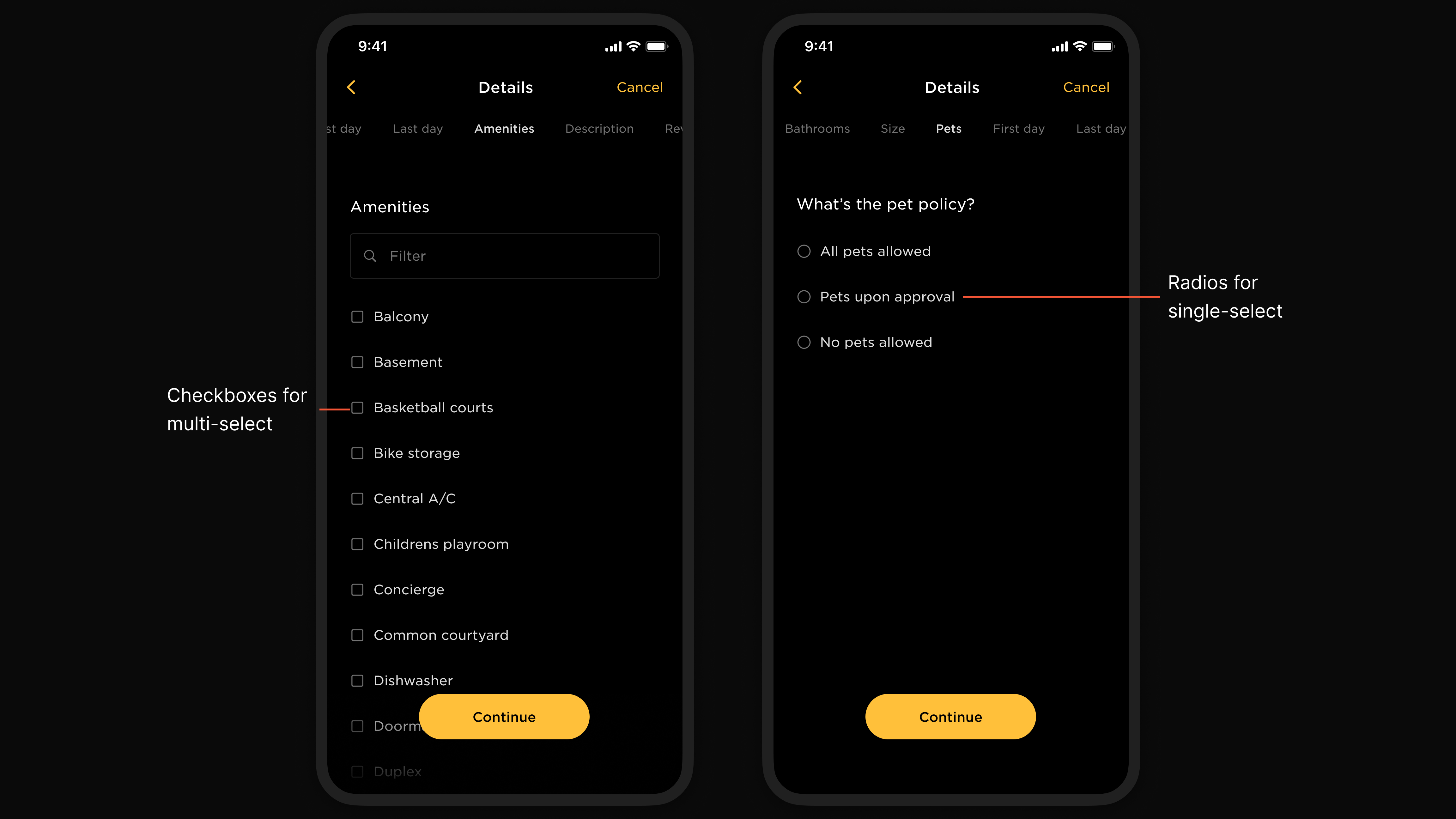 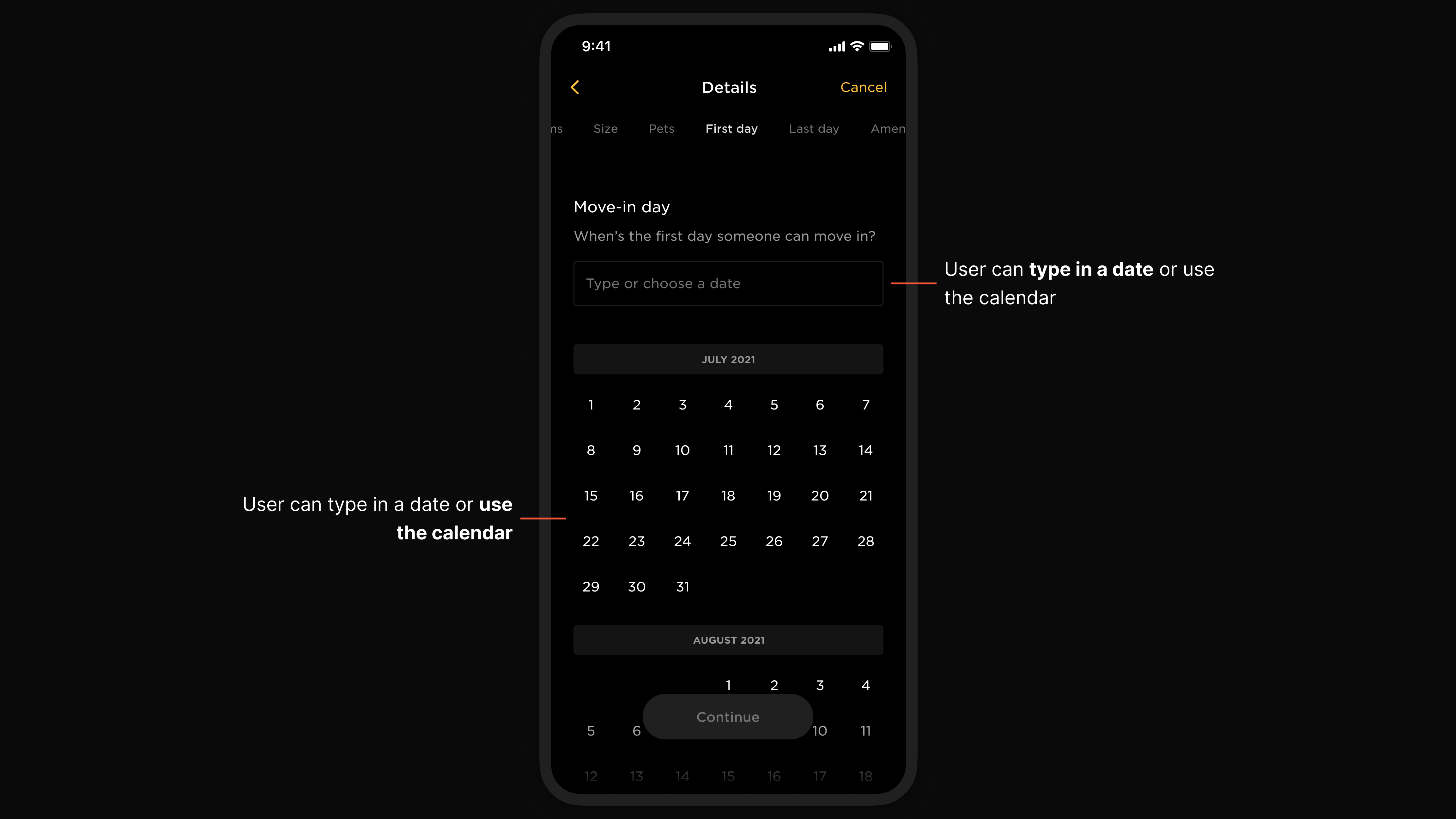 (3/4) Next, we created a better photo upload experience

(4/4) Finally, we asked 3 simple questions about each room

The step to add rooms was straightforward—just a couple of text fields.

After creating the listing, users could direct message with other users who requested a tour to view the apartment. I wanted to add a popover to remind both users which apartment a conversation was about but in the end, we declared it a nice-to-have and shipped without it.

Finally, users needed to manage their listings. Due to technical constraints, there wasn't much else that the user would be able to do other than share a listing and remove it from the marketplace once they found a roommate. I tested a couple designs and ended up with a simple master-detail navigation structure.

After launching, we saw a 100% increase in total number of rooms in less than 3 months

The feature was a huge success. Within 3 months, hundreds of rooms were create until the total number of rooms more than doubled. 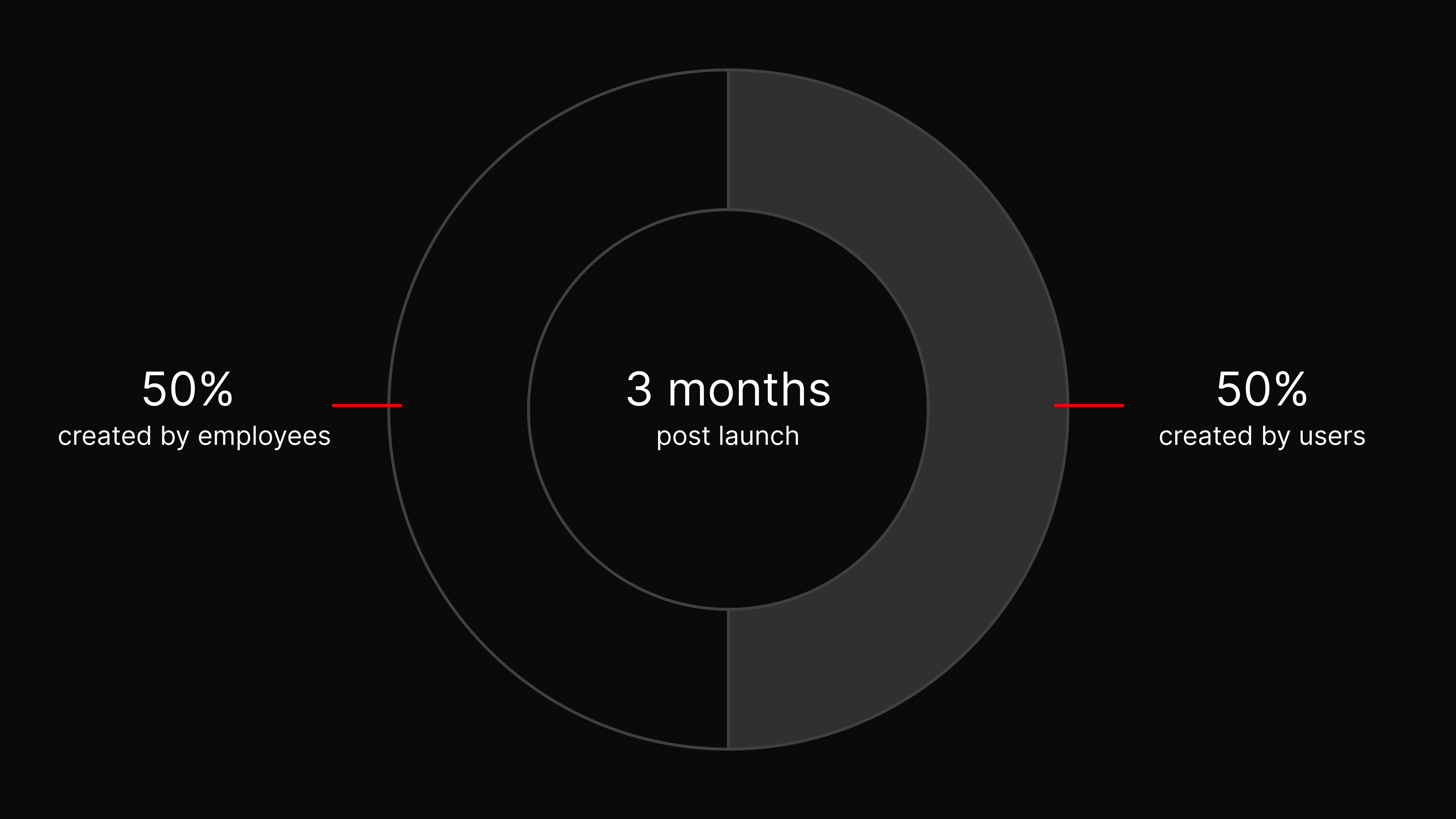